Ad blocker detected: Our website is made possible by displaying online advertisements to our visitors. Please consider supporting us by disabling your ad blocker on our website.

Magnus Kofoed Andersen - Mc - Nordsjælland. Just as good as some of the other updates.
Raphinha - Am r/l - Leeds. Prolific, has a relegation clause if Leeds combusts.
Galeno - Am r/l - Braga. Often becomes unhappy. Takes a bit to settle i England but will come good.
Sam Cosgrove - Sc - Aberdeen. Pretty decent striker, not world class but can make the national team, will move to the Championship.
Top

Thornz wrote: ↑Sat Dec 12, 2020 1:20 pm Olivier Thill (23) is an excellent AM/F for lower league teams. He's a free agent at the start of the game and can play both in midfield and attack.
I managed to sign him at Woking and sold him not even a full season later (after winning the Conference) to ManU for 4 million.

Wanted a 400k signing on fee to join Rangers in my game. Guess if you go for him you should offer first team status or above, that was as a squad rotation player. Or maybe he just didn't want to come to Scotland and was too polite to say.
Top

Just tried to sign him for Salford and he wants 25k per week!!
Top 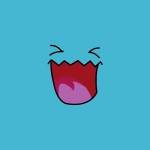 This guy looks ok. Juve (AI) bought him for €1m in the first season (I'm using Nick's patcher, think the inflation is set to 2.5...) and he's been World Footballer of the Year runner-up twice. 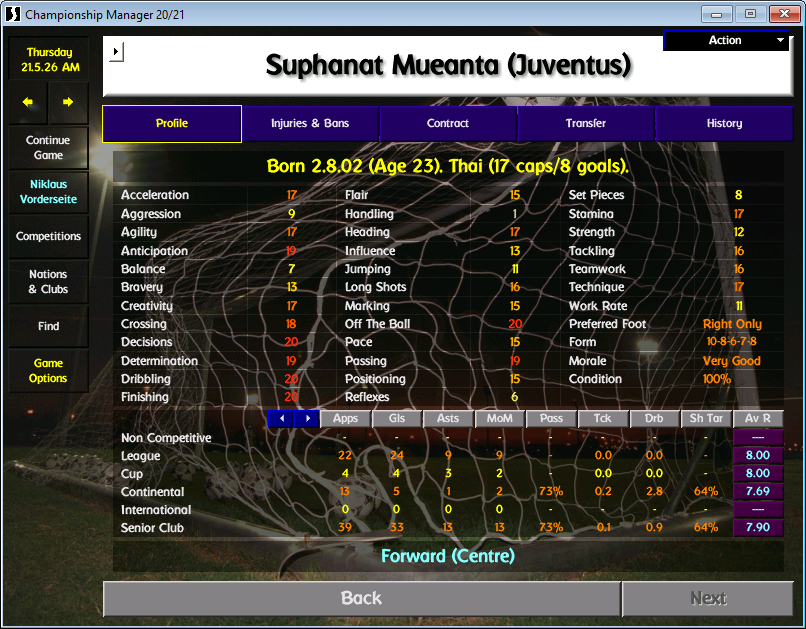 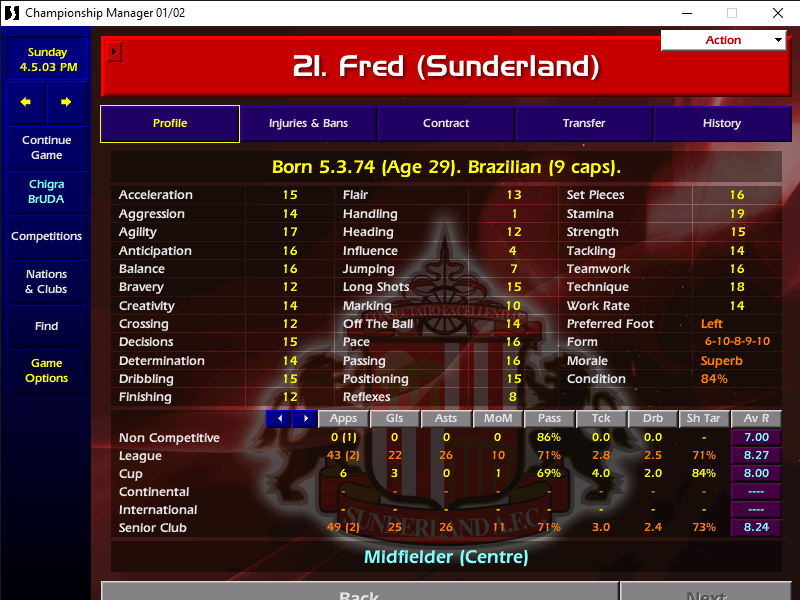 I bought Fred from Man Utd (when become unhappy) for 3,3m euro and A.Gomes from Everton 4,3m euro.
They are superB for championship 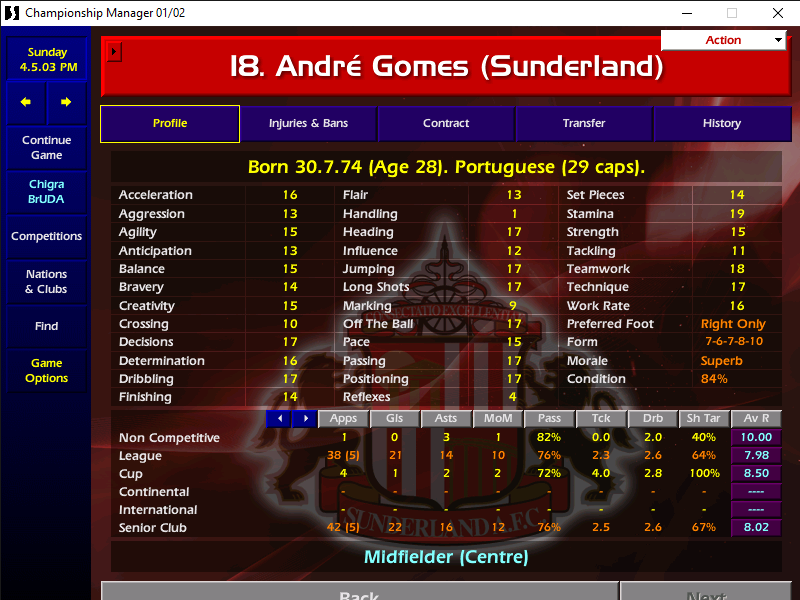 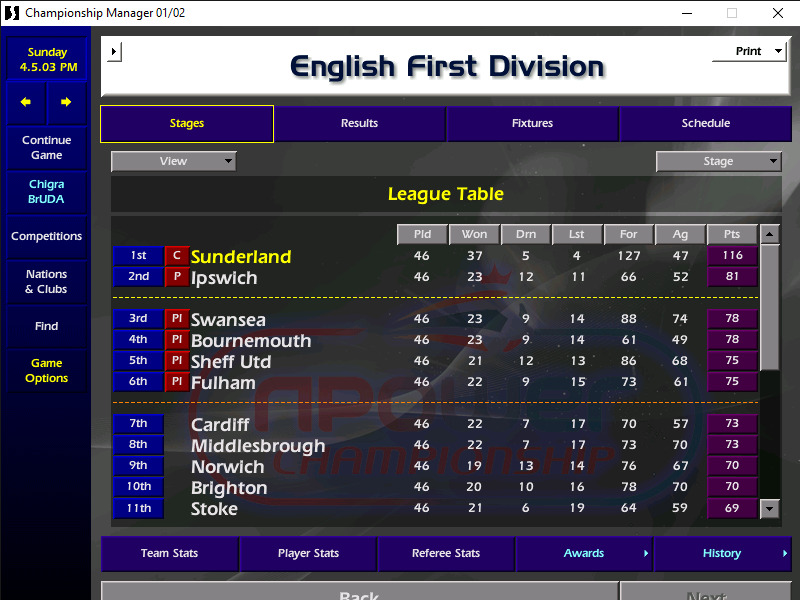 I signed Bernard from Everton for £3m and he is averaging around 8.4. A Goal or assist or both in almost every game. Sensational acquisition
Top

Someone got a few good players for third division in Engeland.. just got promoted but need some good signing
Top

the Dutch wrote: ↑Tue Jan 26, 2021 12:24 pm Someone got a few good players for third division in Engeland.. just got promoted but need some good signing

There's a guy called Joe Hardy F C R, he was released by Liverpool in a game I played and went to Solihull where he ripped it up. In August the top teams are going to release shedloads of talent to accomodate their new players coming up from the reserves so just offer contracts to everyone who looks halfway decent and you should end up with a good team for that level
Top

the Dutch wrote: ↑Tue Jan 26, 2021 12:24 pm Someone got a few good players for third division in Engeland.. just got promoted but need some good signing

Here is a few that have served me well 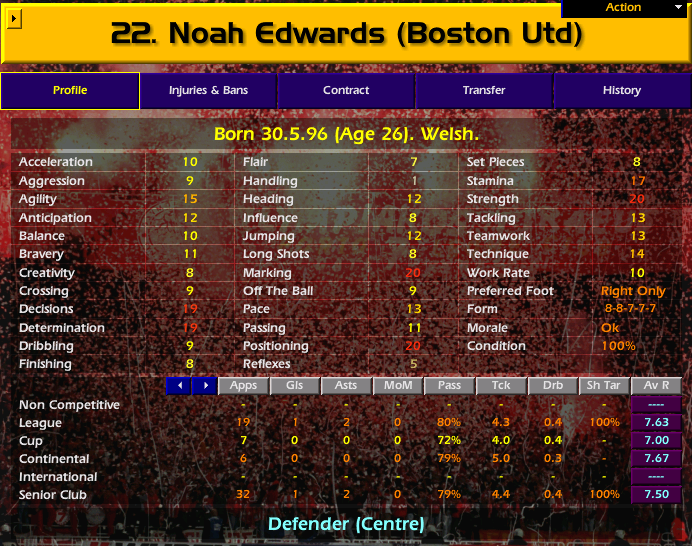 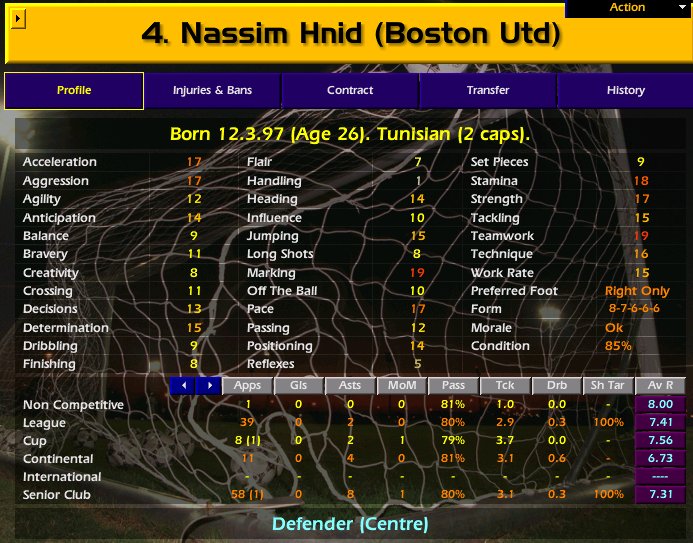 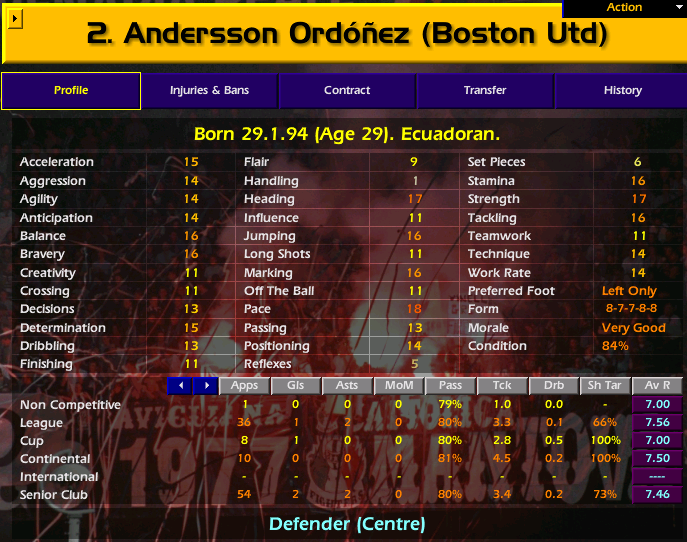 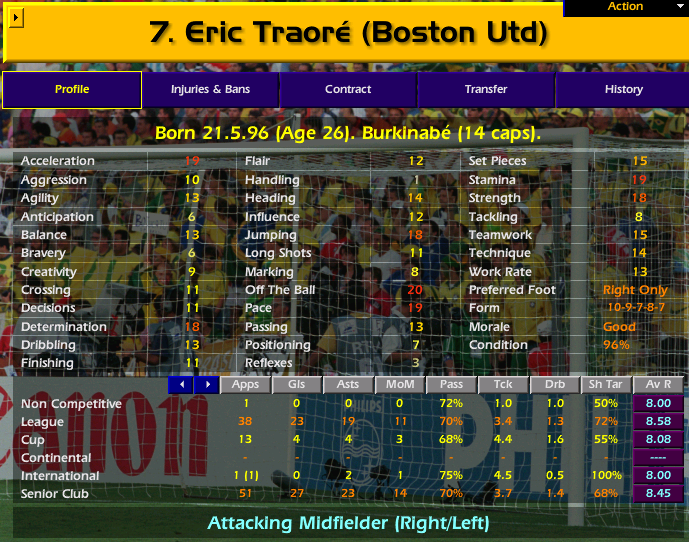 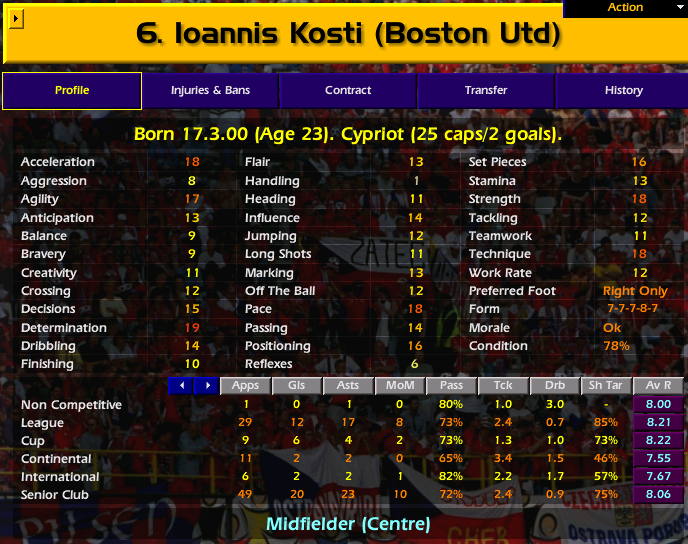 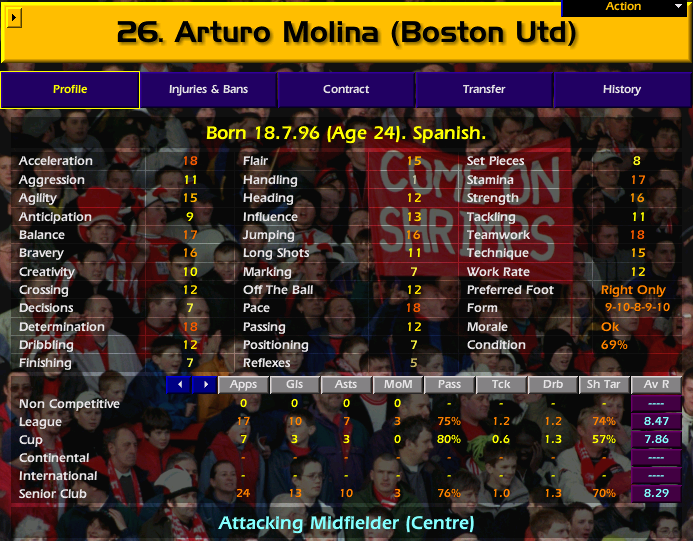 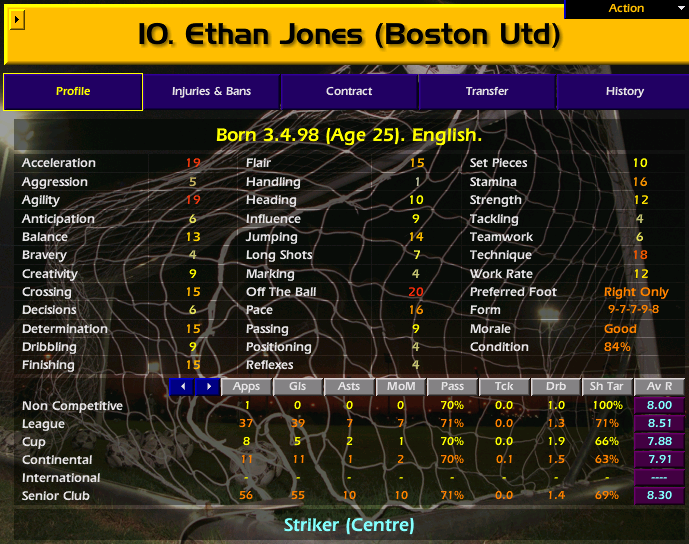 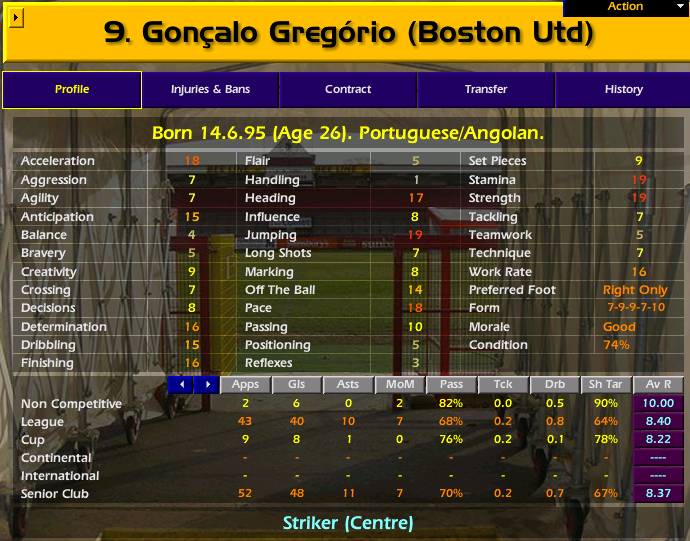 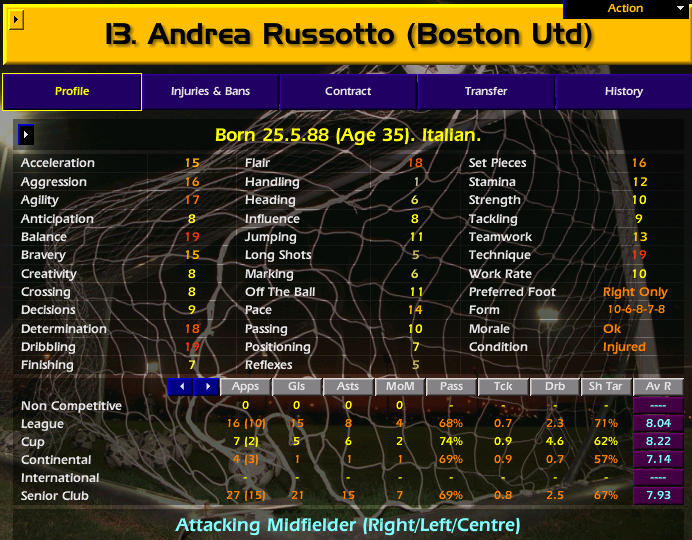 Ricardo Esgaio from Braga is well worth picking up.
Top

joris gnagnon great centre back at any level
Top 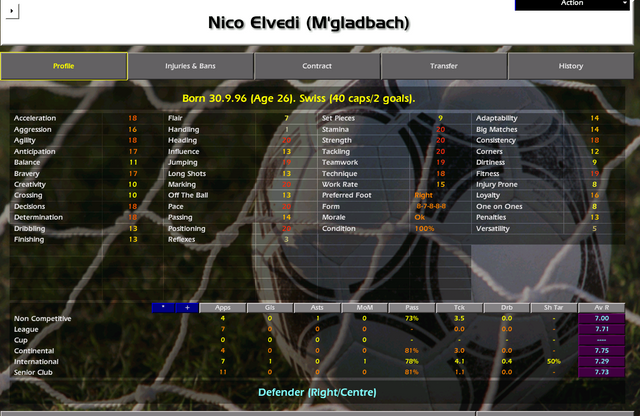 After 5 seasons, Rayan Cherki transformed into this: 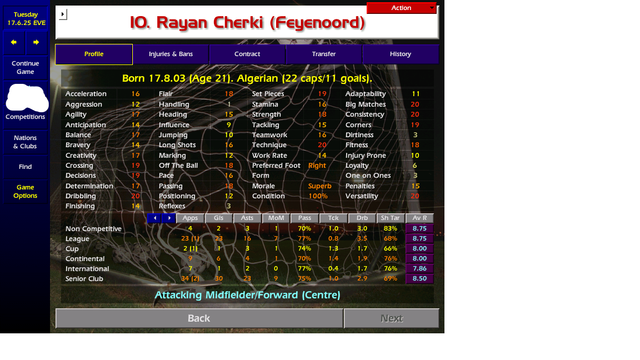 Great player. He played AM(C) and was prolific. The stats you see were in his second season. His first season was even better.
Unfortunately, I had to sell him, since he wanted to move to a bigger club, so I sold him to Dortmund.
Top

Got this guy on a bosman.
Top

Bought this lad from FC Köln for roughly € 4,5 million and he is already my main striker in the Bundesliga. His Loyalty is low, so if I don't become a bigger club, I'm afraid he will request a transfer to move elsewhere: 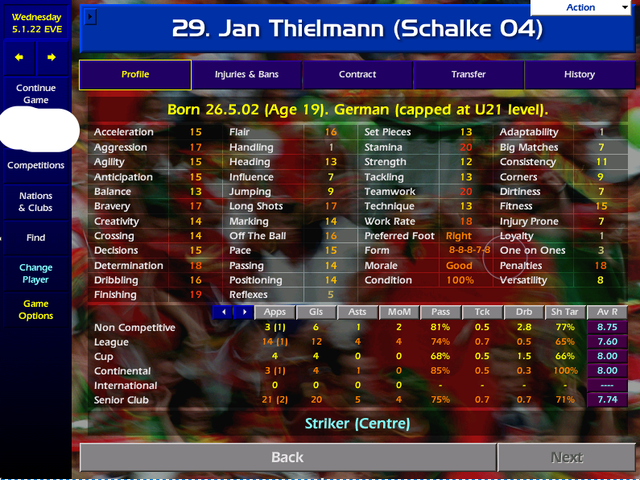 Return to “Talents, Tips and Training”